Welcome back to Humor Nation. A wide spread online revolution from the fans saved Lucifer. Due to the popularity and love of the fans, Netflix decided to pick up the FOX canceled series. While the production quality surely increased with Netflix as the budget is more, also the creative freedom allowed the creators to experiment more with the episodes. Many fans believe that the content quality improved in Season 4 & Season 5 of Lucifer, but is that the truth? There’s an objective way to judge that, it’s the IMDB ratings.

Find Out If You Are Lucifer Or Amenadiel?

The highest rated Lucifer episode is the Season 3 finale ‘A Devil of My Word’. Previous episode saw the death of Charlotte who died protecting Amenadiel at the hands of Marcus Pierce. Dan discovers that Charlotte was investigating Pierce and he’s the Sinnerman. Lucifer and gang devise a plan to take down their lieutenant and the criminal mastermind. Only Lucifer is aware of the true identify of Marcus AKA Cain. The situation escalates, Cain and his men start firing at Chloe, Lucifer uses his wings to protect Chloe and then drop her at a safe spot. The climax saw Lucifer killing Cain and his devil face returning. The closing moments of the episode saw Chloe Decker seeing the true face of Lucifer and realizing that it’s all real. The episode has an IMDB rating of 9.8.

The finale episode of Season 5 is titled ‘Spoiler Alert’ and it has an IMDB rating of 9.5. The episode sees Lucifer and Ella rushing to find out the whereabouts of Chloe. They investigate to discover the true identity of the killer from the previous episode, but the killer didn’t abduct Chloe. Later, Lucifer finds out it was his twin brother Michael who took Chloe. The climax saw Lucifer, Michael, Maze, and Amenadiel battling. The close moments of the episode saw the ‘God’ making his debut on the show.

So Take This Quiz And See If You Can Identify Lucifer Season & Episode Using Lucifer Morningstar Picture?

Can You Identify The Episode & Season Using Lucifer Morningstar Picture?

Think you are a passionate Lucifer fan and are well aware of all the seasons and episodes, then take this quiz. 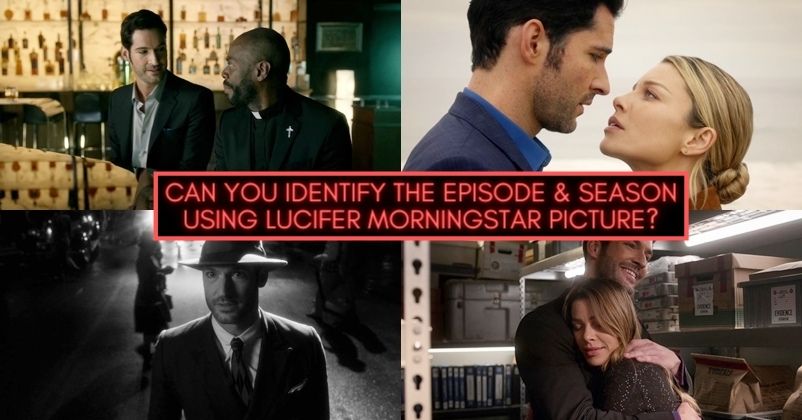