Hello Readers! Welcome back to Humor Nation. Riverdale has so many fascinating characters. There’s more to these characters than what our eyes see. For example, Betty Cooper who is often seen as the perfect girl next door, but people don’t realize that it’s actually far from the truth. Betty Cooper suffers from many issues which the people around her aren’t aware of. She has anger and aggression issues which often results in her clenching her fist so hard that it left scars on her palms. Betty has lost control of herself at several occasions and did things which are surprising. She dressed up in in black with a fake big in order to lure Clayton into confessing that he lied about his date with Veronica. Betty lost control and for a momentary second she believed that Chuck Clayton was Jason and she was Polly.

RIVERDALE QUIZ: Which Riverdale Hairstyle Should You Steal?

But Betty is really a strong woman who would fight for what she believes in and would go to any extent for her family and friends. She could even take extreme steps to prove her courage and nerve. She drove a motorbike at a high speed to mislead the police and save Archie.

Jughead is a guy with dark humor who could be cynical and apathetic at times. He is very intelligent and is known for his writing. He keeps himself detached from the others, but is very loyal to Betty and Archie. One of the best qualities of Jughead is that he is extremely determined and once he has set his mind on to something, there’s no backing off.

So Take This Quiz And Find Out If You Can You Identity The Riverdale Characters Using Their Internet History? 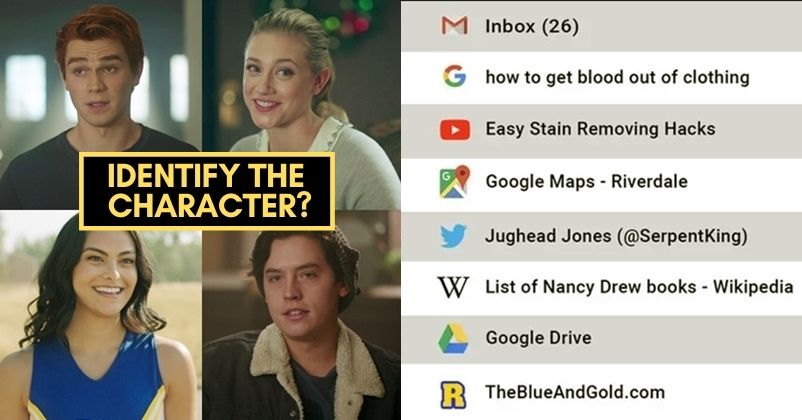