Humor Nation Make The World Smile
Home TV Can You Name The Episode In Picture From TVD Season 1?

Welcome back to Humor Nation. The pilot episode marked the beginning of an epic journey, nobody had thought that TVD would become that much popular. The Pilot episode proved why this show is not just another rip-off of Twilight, it’s original and something refreshing. We see Elena Gilbert, a teenage girl who is struggling with the loss of her parents who died tragically in an accident. She comes across a handsome stranger named Stefan, his mysterious aura catches her attention. Soon we learn that Stefan is a vampire. There have been numerous strange hunting happening in Mystic Falls. Stefan’s brother Damon appears during the final minutes of the pilot. TVD would go on to run successfully for eight seasons, many rank Season 1 among the best seasons.

One of the best episodes from Season 1 is the episode 6 titled ‘Lost Girl’s which takes us to 1864 in the flashbacks where we learn about the history of Stefan and Damon. We also get to see the doppelganger Katherine, lookalike of Elena, with whom the brothers fell in love. In the same episode, Damon turned Vicki into a vampire which results in plenty of Chaos. The newly transformed Vicki cannot control her hunger and starts attacking Elena and Jeremy. Stefan had to ultimately stake and kill Vicki Donovan to end her misery.

The penultimate episode of Season 1 would see Elena’s biological mother making her way into Mystic Falls. But her mother isn’t what she expected her to be. She asks Elena to hand over the Gilbert device or she’ll harm the loved ones of Elena. We learn that Isobel and John are working for Katherine Pierce, the Petrova doppelganger. Ultimately, Elena is forced to hand over the device to Isobel.

This device would create plenty of problems in Season 1 finale ‘Founder’ Day’, when it is activated, it starts harming the vampires, resulting in them becoming neutralized. But along with vampires, other Supernatural creatures including the werewolves such as Tyler and Richard are also affected. The episode marks the arrival of Katherine who under the pretension of Elena enters the Gilbert House and harms John. So let us know what is your favorite episode from The Vampire Diaries Season 1?

So Take This Quiz And Find Out If You Can Name The Episode In Picture From TVD Season 1?

Can You Name The Episode In Picture From TVD Season 1?

Season 1 consisted of 22 episodes, some of them are really memorable episodes. Take this quiz to see how well can you recognize the episodes from Season 1. 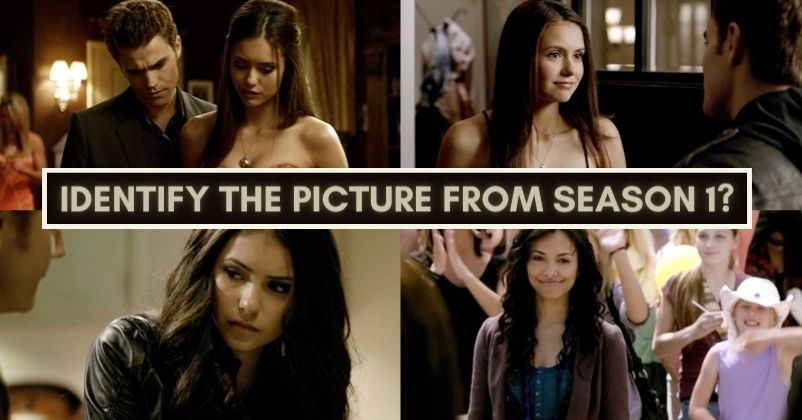