Humor Nation Make The World Smile
Home TV Do You Remember The First Line Of Your Favorite Originals Characters?

Welcome back to Humor Nation. In Season 2, the concept of Originals were introduced, and the great evil Klaus Mikaelson made his way into the Mystic Falls. He was hunting Katherine Pierce for nearly 500 years after she slipped through his fingers and foiled his plan to become the first Original Hybrid. Katherine spent centuries in hiding from Klaus while searching for the other Petrova Doppelganger whom she can offer to Klaus in order to exchange her freedom. When Katherine located Elena Gilbert, she informed Klaus of her which made it possible for the Original Vampire to lift up the Hybrid Curse that was placed on him nearly a thousand-year ago.

While now he had the Petrova and all the ingredients needs for the ritual sacrifice. But he faced a lot of defiance from the Salvatore brothers who did all they could to save the life of Elena. However, Klaus would go on to kill Elena and a few other innocents for his selfish purpose. After becoming a hybrid, he was almost killed by his brother Elijah Mikaelson who spared him after coming to know that their entire Mikaelson family is safe and alive, but neutralized. Season 3 of the Vampire Diaries would see the dysfunctional Mikaelson family reuniting with each other. The episode titled ‘Dangerous Liaisons’ featured the Mikaelson Ball. Interestingly, it was this episode this inspired the creators to focused on a spin-off centering about the Original Vampires.

In Season 4, Klaus would have a one night stand with the werewolf Hayley Marshall whom he rescued. Their brief encounter would have long lasting impacts in the TVD Universe. As Klaus had lifted up the curse, he was also a werewolf which allowed him to procreate. Nature allowed this loophole so they both can conceive a child which would aid Nature getting rid of a greater evil. Season 4 of TVD would also set up a backdoor pilot for the spin-off. Hayley Marshall is kept captive by the witches who knows about her pregnancy.

Klaus gets a wind of the conspiracy of the witches against him and goes to New Orleans where he encounters his old protege Marcel. Elijah also follows his brother to discover the truth. After learning everything, Elijah convinces the Klaus to stay in New Orleans and to father his child.

So Take This Quiz And Find Out If You Can Answer The First Line Of Your Favorite ‘Originals’ Characters?

Do You Remember The First Line Of Your Favorite ‘Originals’ Characters?

If you think you are a true fan of the Originals then this quiz is for you. You surely must have paid attention to details. Not everyone will remember the first lines of their favorite characters. So proceed at your own risk! 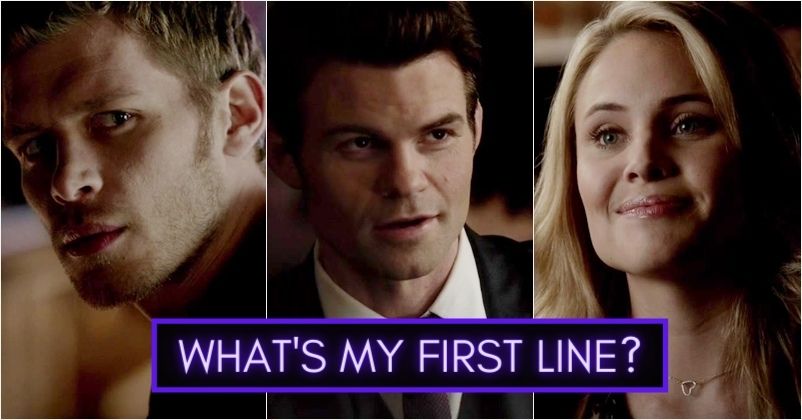