Humor Nation Make The World Smile
Home TV Do You Remember The First Line Of Your Favorite TVD Characters?

Welcome back to Humor Nation. The pilot episode of The Vampire Diaries starts with the voice over of Stefan Salvatore who introduces us to the show and reveals that he is a vampire and this is his story. Then the scene moves to the Gilbert House where we are introduced to the character of Elena Gilbert who can be seen writing in her dairy. Downstairs, we see Jenna, Elena’s aunt who offers to make breakfast for Elena and her younger brother Jeremy. Then Elena meets her friend Bonnie who tells her that she feels she is psychic. Then the scene moves to Mystic Falls High School, where Stefan can be seen walking around the campus. The vampire Stefan Salvatore has enrolled as a student at the Mystic Falls High. We then see Caroline, best friend of Elena and Bonnie.

How Well Do You Remember The Important Moments Of Delena From TVD?

The episode concludes with Damon appearing in front of Damon. Stefan expresses his disliking of Damon being in the town. Damon answers that he is in town because of Elena, the girl who is the doppelganger of Katherine. The same reason why Stefan also stayed in Mystic Falls. Damon tells Stefan that he should feed on Elena which results in both the brothers getting into a fight. The elder Salvatore brother, Damon, overpowers Stefan as he is feeding on human blood. .

The pilot episode of TVD introduces us to various different characters such as Elena, Stefan, Jenna, Jeremy, Bonnie, Matt, Tyler, Vicki, Caroline, and Damon. The first episode featured all the main characters

So Take This Quiz And Find Out If You Remember The First Line Of Your Favorite TVD Characters?

If you think you are a true fan of the show then this quiz is for you. You surely must have paid attention to details. Not everyone will remember the first lines of their favorite characters. So proceed at your own risk! 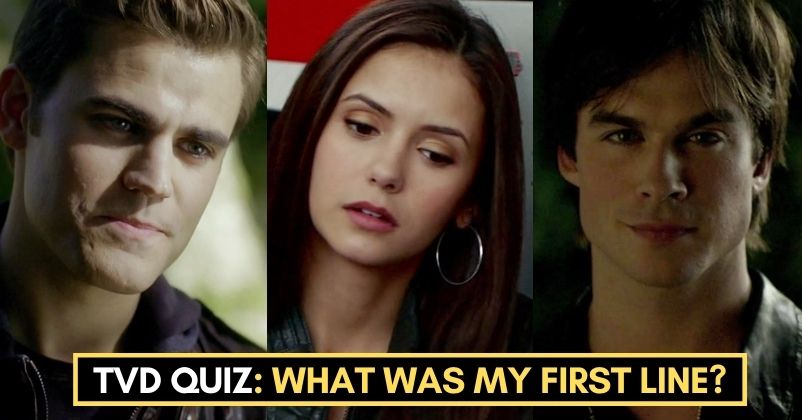