Humor Nation Make The World Smile
Home TV Do You Remember The Last Line Of Your Favorite TVD Characters?

Welcome back to Humor Nation. The Vampire Diaries ran successfully for eight years and concluded after 171 episodes. The series finale of TVD was titled ‘I Was Feeling Epic’ which aired on 10 March 2017. It marked the ending of TVD saga. The episode stars with Caroline and Bonnie who try reviving Bonnie who is caught in a state between life and death where she meets Elena. Bonnie doesn’t mind being dead as she is reunited with Enzo, but Enzo tells her to return to her body because it is not her time. The Salvatores then visit the boarding house where they find Elena’s coffin opened and she is standing beside it. But it turns out it’s not Elena, but Katherine.

During the climax, Stefan sacrifices himself to take Katherine down. In the afterlife, Stefan is reunited with his best friend Lexi and he quotes ‘I was feeling epic’, an iconic TVD quote which was earlier said by Lexi. Bonnie breaks the sleeping beauty curse and Elena is brought back to life. The Salvatore boarding house is turned into a school for the supernatural and managed by Caroline and Alaric with support of Dorian and Jeremy. Klaus gives a hefty $3 million donation to the school.

We later see Damon and Elena who are now married. Elena achieves her dream of becoming a doctor and can be seen writing in her diary near the grave of Stefan. Damon and Elena lives a long peaceful life together. In the afterlife, Elena is reunited with her parents, Jenna and John. Damon visits the boarding house in afterlife where Stefan opens with door and he greets him with ‘Hello, Brother’!

So Take This Quiz And Find Out If You Remember The Last Line Of Your Favorite TVD Characters?

Do You Remember The Last Line Of Your Favorite TVD Characters?

If you think you are a true fan of the show then this quiz is for you. You surely must have paid attention to details. Not everyone will remember the final lines of their favorite characters. So proceed at your own risk! 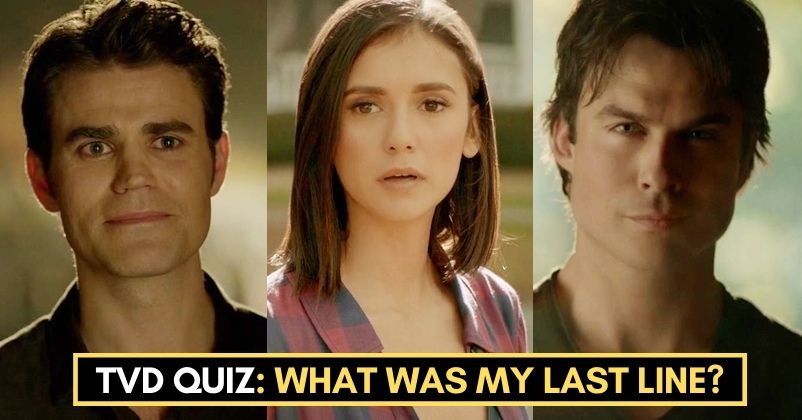