Humor Nation Make The World Smile
Home TV How Well Do You Know Damon Salvatore From The Vampire Diaries?

Welcome back to Humor Nation. Damon Salvatore made his debut in the pilot episode of the Vampire Diaries. Right from his first appearance, it became quite clear that he is nothing like his brother Stefan who is compassionate, introvert, reserved, and patient. Damon is flamboyant, charismatic, often makes sarcastic remarks, and isn’t afraid of speaking his mind without caring about his consequences. Damon starts taunting his brother after his arrival in the Mystic Falls. He was also aware of the reason why Stefan decided to return to Mystic Falls, the lookalike of their former lover, Elena Gilbert. The brothers soon get into a fight where Damon gets the better of Stefan, displaying his superior strength as he has been feeding on human blood for so long while his moral brother gave up the human blood, and fed only on animal blood to survive which made him gradually weaker.

Elena Gilbert who was involved in a deep relationship with Stefan and was eventually going to choose him as his partner before her accident happened in Season 3 finale which transformed her into a vampire. As she died, the compulsion on her was also removed, and the viewers got to see all her repressed memories that she was forced to forget due to compulsion. Damon was the first person to have come across Elena, he compelled her to find the epic love she’s looking for, and then compelled her to forget. Some could argue that it was because of Damon’s compulsion that Elena and Stefan fell in love in the first place.

They would meet again in the second episode of Season 1 when Elena comes looking for Stefan at the Salvatore House, but since she was compelled to forget about their first meet, she doesn’t recognize Damon. After their first interaction, she sees Damon as cruel, selfish, violent who would then go on to cause numerous problems in Mystic Falls and would torment her friends.

Damon would also display a cold and apathetic attitude towards Elena, not caring whether she’d live or die, but it was only in the later season that he revealed that he cared for Elena all along. Ever since the first moment when he laid on Elena, he fell in love with her, but he knew that he couldn’t have her.

So Take This Quiz And Find Out How Well Do You Know Damon Salvatore From The Vampire Diaries?

So you think that you are a crazy passionate fan of Damon Salvatore? You think you remember all his storylines and important moments then take this quiz. 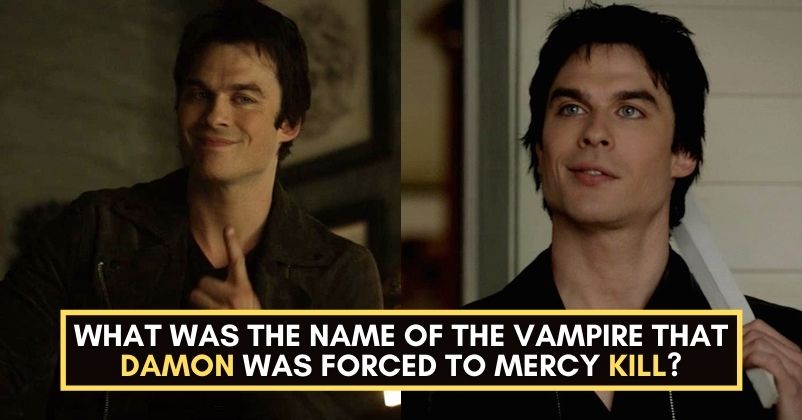