Home TV How Well Do You Know Stefan Salvatore? Quiz For True Fans

Welcome back to Humor Nation. Stefan Salvatore was turned into a vampire by Katherine Pierce. After becoming a vampire, he battled the bloodlust for a long time unless Lexi came along and helped him. But through out his life, he has fallen to the urges of feeding on human blood, and ended up becoming a Ripper several times. As a Ripper, he’s one of the worst vampires ever. Even Klaus was impressed by his ruthlessness and monstrosity. He also been involved in a relationship with Rebekah Mikaelson, younger sister of Klaus.

When Stefan Salvatore returned to Mystic Falls, he heard about the accident at Wickery Bridge which involved Elena and her parents. He saved the life of Elena, but was unable to save her parents. At this time Elena wasn’t aware of Stefan. It was only later that they crossed paths at the School and felt drawn to each other. Elena soon developed a romantic relationship with Stefan as they both shared numerous qualities and beliefs in common. Elena soon finds out the deep hidden secret of Stefan that he is a vampire, but she gradually comes to accept his identity and keeps loving him. However their relationship ended in S4 when Elena confessed his love for Damon to him. But despite all, they still cared and supported each other.

Stefan and Caroline’s relationship was developed when Stefan mentored the newly transformed vampire Caroline. He taught her how to control her urges and get used to the new lifestyle. Stefan offered her a great deal of emotional support and Caroline did the same. In Season 8, they married each other. However, their happiness was cut short when Stefan sacrificed himself to defeat Katherine.

There are numerous differences in his character when compared to the TVD novels. In the book, he loved Katherine for centuries and became heartbroken when she died. However, in the show, he only loved her before finding out about her true identity of a vampire. He had shared an antagonistic relationship with her, killing her twice. Also, in the books, he had only two love interests, Katherine and Elena. Whereas on the show, we have seen being romantically involved with numerous characters. In contrast to Damon, Stefan is the moral brother, the kind and compassionate one.

So Take The Quiz And Find Out How Well Do You Know Stefan Salvatore?

How Well Do You Know Stefan Salvatore From TVD?

So you think you are a big fan of The Vampire Diaries and you have the complete knowledge about all the characters? Take this quiz to find out how much do you really know about this handsome Vampire. 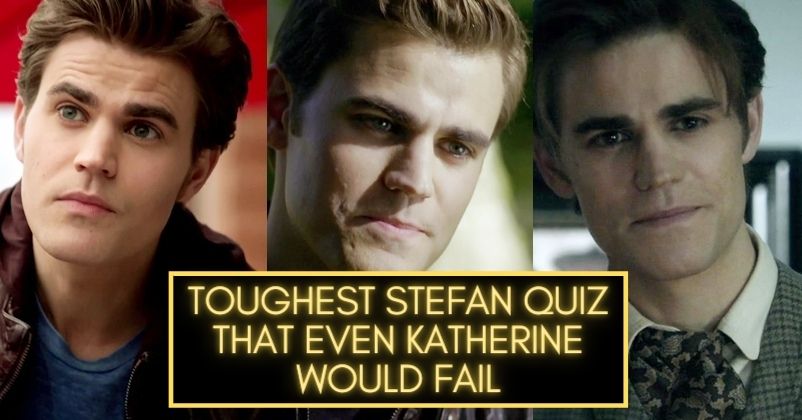 Can You Identify These Vampire Diaries Characters Using Their Eyes?

Which Vampire Are You From The Vampire Diaries?

6 Interesting Facts About Lucifer That Even The Crazy Fans Don’t...