Humor Nation Make The World Smile
Home TV How Well Do You Know The Love Triangles From TVD?

Welcome back to Humor Nation. There were many love triangles in The Vampire Diaries and the major one was of Damon, Stefan, and Elena’s and before Elena it was Katherine. Their love and romance was pretty complex so it was obvious that such triangle would form. So today we’ll discuss which love triangles were the best of all the three shows. Let’s get started!

The Most Challenging TVD Quiz For The Crazy Fans

Elena, Damon, Stefan! Elena started off by dating Stefan in the beginning and then came a path where she found herself attached to both the brothers and had to choose only one and let the other go. She still chose Stefan but then she realized that she fell for Damon and went to him. Their love triangle was the main element of the show. But it wasn’t the first love triangle involving the Salvatores. Katherine, Damon, Stefan! This whole story started with Katherine being with both the Salvatore brothers and they were madly in love with her. Katherine at first did not choose anyone and dated them together and then she turned them into vampires. Then Katherine realized she loves Stefan but she never let Damon go too. She was happy with both of them.

These love triangles are not limited to TVD, it’s spin-off ‘The Originals’ also featured a few love triangles. Most notably, the one involving Elijah, Hayley, and Jackson. Hayley and Elijah had great chemistry but they stopped their feelings for the sake of others. First because of Klaus as she was pregnant with his child and then because of Jackson as she had to marry him for her pack. Hayley really liked Jackson and respected him a lot and Jackson was always in love with Hayley. But Hayley’s one true love was always Elijah.

So Take This Quiz And Find Out How Well Do You Know The Love Triangles From TVD?

How Well Do You Know The Love Triangles From TVD?

The love and romances in TVD have been pretty complex to the extent that it has resulted in a love triangle. The Vampire Diaries featured plenty of love triangles. Put your knowledge to test and find out how much do you know about the various love triangles in the TVD Universe. 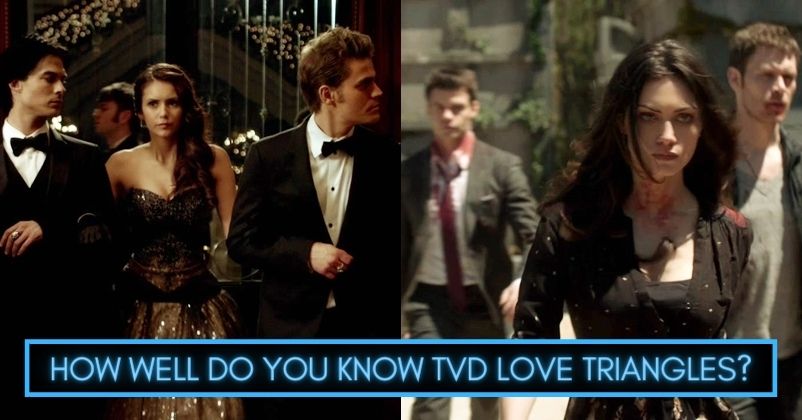