Humor Nation Make The World Smile
Home TV How Well Do You Remember The Last Words Of The Vampires In...

Welcome back to Humor Nation. The last words of a character are significant for numerous reasons. They are the final words uttered by the character on the screen, it must be something that is relevant and true to his character. Not every time a character gets to say something that could beautifully sum up his character, but when they do, it’s poetic. Interestingly, Vampire Diaries has given some characters a beautiful ending, their final words not only conclude their story arc in the best way possible, but are also a nod or a reference to their earlier scenes. The final scene of the TVD which involves Stefan and Damon getting reunited in the afterlife and embracing each other can make anyone go teary. But if you notice their words, it’s the callback to the very first interaction the brothers had on the screen in the Pilot Episode. Things came full circle in the finale episode of the Vampire Diaries.

5 Interesting Things To Know About The Actors In TVD Universe

It’s nothing new, Vampire Diaries has several times used the callbacks, and references to the earlier seasons and episodes. The name of the final episode of TVD is ‘I Was Feeling Epic’ which is a nod to Lexi Branson’s iconic quote in Season 1 Episode 8. When Stefan reunites with Lexi in the afterlife, she brings up the heroic sacrifice that Stefan did for the others. To which he responds saying ‘I Was Feeling Epic’ and the two embrace.

The last words of the Originals Elijah and Klaus Mikaelson are simply beautiful. The final conversation involves a reflection and a confession. Klaus is surprised as how Elijah is ready to join him into the afterlife, to which Elijah tells him it’s his choice. A choice that was taken away from them by Esther and Mikael, he’s just taking it back. Elijah confesses how he sees his future incomplete without Klaus, his sole desire was to see the redemption of Klaus which he has witnessed. Klaus is perplexed and questions about the afterlife, what if there is nothing? Elijah comforts him saying whatever lies beyond, they both will face it together. The two embrace and share a tear. Klaus tells Elijah how he is not deserving of his love, but he is eternally thankful, to which Elijah responds saying it’s been a glorious ride.

So Take This Quiz And Find Out How Well Do You Remember The Last Words Of The Vampires In TVD Universe?

How Well Do You Remember The Last Words Of The Vampires In TVD Universe?

So you think you are a big fan of The Vampire Diaries and The Originals? Do you remember every tiny detail about all the seasons of the shows? Take this quiz and see if you can answer the last words of the TVD Universe Vampires. 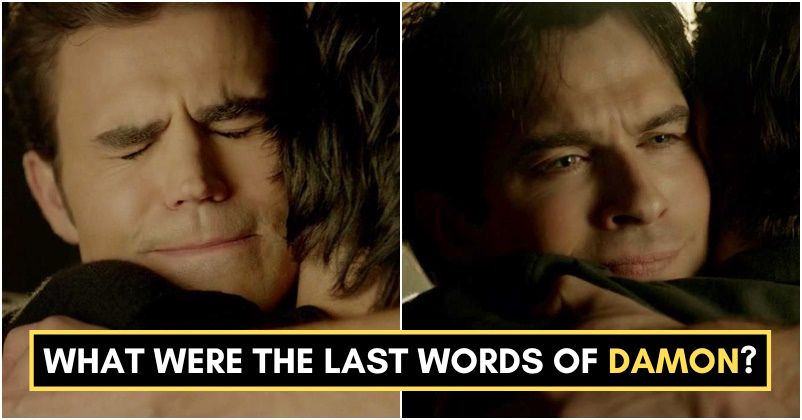