Humor Nation Make The World Smile
Home TV How Well Do You Remember The Last Words Of The Witches In...

Welcome back to Humor Nation. While some of the deaths of the witches were satisfying, many were simply heartbreaking. Many of the characters have died several times on the show, but we won’t be focusing on all their deaths. For example, Esther Mikaelson, she was first killed by Alaric on TVD who ripped her heart out, but she was resurrected on the Originals. She played a big role in Season 2 storyline which saw her sister Dahlia making the return to claim the first born in the Mikaelson family. When Esther saw all her kids fighting against their aunt to save Hope, seeing their bond to be willing to die for each other.

How Well Do You Know The Symbols From TVD Universe?

She lunges forwards and wraps a long chain around her sister Dahlia’s neck. She then calls for her son Elijah to kill them both which was the only way to end Dahlia. If Esther had not done it, Dahlia would have killed all her children. One of the heartbreaking deaths in TVD was of Sheila Bennett, she was the grandmother of Bonnie Bennett whom she referred to as Grams. She assisted Bonnie in lowring the seal over the tomb, allowing vampires to enter, but not to leave. Sheila exhausted her energy in the spell and was greatly affected by the spell. She told Bonnie that she would be fine, but she eventually passed away.

This quiz is focused on the last words spoken by the characters in TVD and The Originals before their death. The answers don’t include the sentences which were spoken by the characters in their spirits form or transforming into a different supernatural entity other than the witches. The quiz only includes the last words said by the witches at the end of their life before their true death.

So Take This Quiz And Find Out How Well Do You Remember The Last Words Of The Witches In TVD Universe?

How Well Do You Remember The Last Words Of The Witches In TVD Universe?

So you think you are a big fan of The Vampire Diaries and The Originals? Do you remember every tiny detail about all the seasons of the shows? Take this quiz and see if you can answer the last words of the TVD Universe Witches. 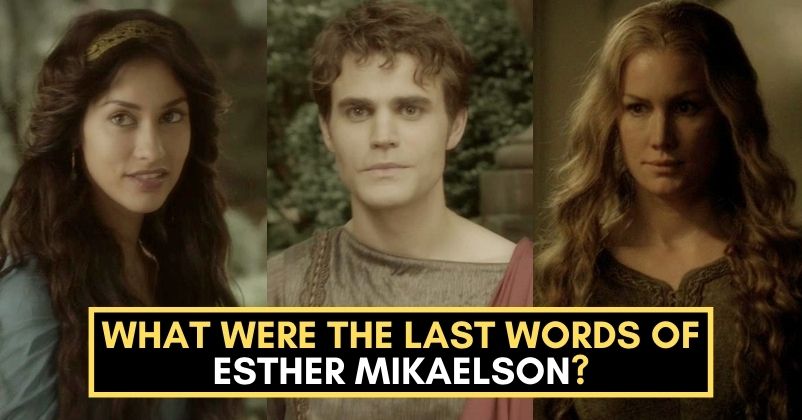