Home TV How Well Do You Remember The Last Words Of TVD Characters?

Welcome back to Humor Nation. Buffy The Vampire Slayer, Twilight, True Blood, all the shows proved that Vampires are not only fascinating, but they can do a great business too. So when vampires were all the rage, CW decided to capitalize on the craze with its own adaptation of the famous LJ smith’s novels ‘The Vampire Diaries’. When TVD got on the air, it immediately became a hit, with the show claiming its own unique fanbase. The show went on to become a huge hit for the CW network.

QUIZ: How Well Do You Remember The Songs From TVD?

The Vampire Diaries is one of the most popular teen drama series and it lasted for eight seasons starting from 2009 till 2017. This show was such a hit that it got two spinoffs, Legacies and Originals. We still cannot get over the characters of this show, The Vampire Diaries ran for eight years and entertained us all, it was one of the highest rated show on The CW and its popularity was at its peak when it was running.

A lot changed throughout the eight years in this show, many came together and many fell apart, but the story is what makes a show worth watching. The characters went through transformations. Some for good while some for worse. We also had to witness the deaths and departure of our favorite characters on the show. It’s really heartbreaking when your favorite TVD character dies or leaves..what makes a farewell even more emotional is the last words of the character.

So Take This Quiz And Find Out How Well Do You Remember The Last Words Of TVD Characters?

How Well Do You Remember The Last Words Of TVD Characters?

So you think you are a big fan of The Vampire Diaries and remember every tiny detail about all the seasons? Take this quiz and see if you can answer the last words of the characters on TVD! 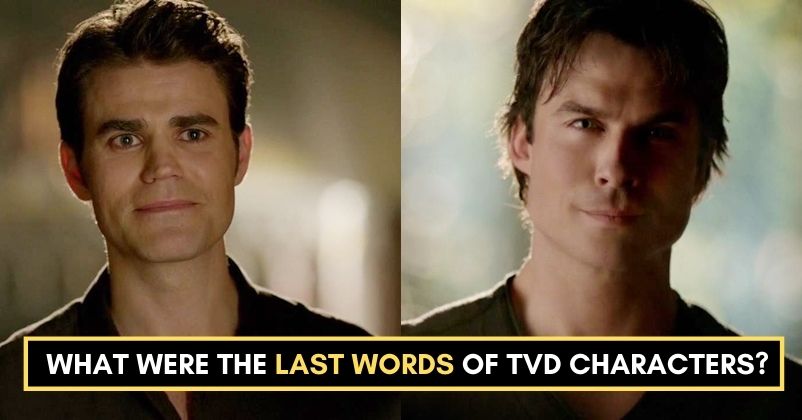 How Well Do You Know The Petrova Doppelgangers From TVD?

Find Out Who Is Your Lover And Bestie On Riverdale?

How Well Do You Know The Red Door From The Originals?