Welcome back to Humor Nation. Legacies is a spin-off of the TVD and The Originals which focuses on Hope Mikaelson, daughter of the Original Klaus Mikaelson and Hayley Marshall. The show also features characters from its predecessor such as Caroline Forbes, Alaric Saltzman. This series features on Hope Mikaelson who is now 17 years old, her character is played brilliantly by Rose Russell.

Which ‘The Vampire Diaries’ Character Will Be Your Quarantine Partner?

The series starts with Hope Mikaelson who is now a student as the Salvatore School for the Young and the Gifted. The school is located at the Salvatore house. Alaric Saltzman serves as the headmaster of the school. Hope helps Alaric in admitting Rafael to the school who is a werewolf. Then there’s Landon Kirby who is the foster brother of Rafael who also eventually becomes the boyfriend of Hope. At first, he was thought to be a human, but it was later revealed that he is actually a supernatural being, a phoenix. His character was also first seen in the Originals.

We also see the Saltzman twins: Josie and Lizzie. Both are witches and students at the Salvatore School. They are the twins of Alaric who were surrogated by Caroline Forbes. The show also featured the characters from the previous shows such as Freya Mikaelson, Jeremy Gilbert, Kai Parker and Matt Donovan. Also, we would like to know who is your favorite character on Legacies and do let us know in the comments section.

Take This Quiz And Find Out If You Can Remember Who Said It On Legacies?

LEGACIES Quiz: Who Said It?

Who said it? This quiz will test how well you know and remember the iconic quotes and dialogues from the Legacies. 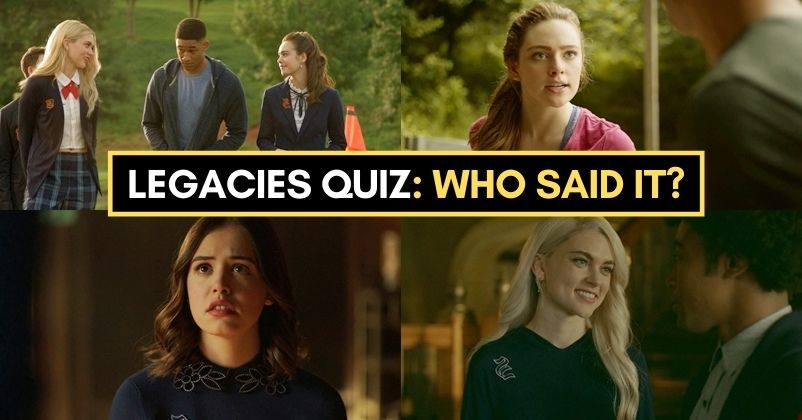 How Well Do You Know The Originals? Only A Mikaelson Can...

How Well Do You Remember The Episode 1 Of Supernatural?