Humor Nation Make The World Smile
Home Quiz Can You Match These Damon Pics To Their TVD Seasons?

Welcome to Humor Nation. Even though Damon Salvatore is a non-original vampire, due to his age and experience of being a 170 years old vampire, he is one of the powerful vampires in the TVD Universe. Even though he is a younger vampire, but due to his military and combat background which supplemented with regularly feeding on human blood, he is a fierce vampire who can hold his ground against the vampires who are older than him. Not to forget that he is a man of determination and sheer will. While it’s easy to see Damon as a brute, but many people underestimate his smart intellect which makes him one of the dangerous vampires in the Vampire Diaries.

Damon like Klaus shared a strained relationship with his father who abused him on regular basis. He was terrified of his father because of his punishment. His father once made him eat his pet turkey which traumatized him. Once when Damon took the blame for taking the money which he didn’t do in order to save Stefan, his father burned him with a cigar. Due to his continuous abuse, something changed in his personality, he became defiant and fearless of his father, he no longer cared about his opinions and openly disrespected his orders. His father shot him when he caught him trying to protect the vampire Katherine. He didn’t mourn the death of his father who was killed by Stefan.

Damon had a close relationship with Stefan before they became vampire, more than brothers, they were close friends. But learning about the death of Katherine paired with him transforming into a vampire, he vowed to make Stefan suffer, promised to make his life miserable. Their strained relationship would eventually improve in the first season of Vampire Diaries when they fought to protect Elena. In Season 2, Stefan sacrifices his freedom to save the dying Damon. They would even contest for the love of Elena who ultimately chose Damon over Stefan.

The finale would see both the brothers making up their mind to sacrifice themselves to kill Katherine and save everyone. But it would be Stefan who decided Damon deserves to live a normal human life, a right which he took from Damon when he forced him to complete the vampire transition.

So Take The Quiz And Find Out If You Can You Match These Damon Pics To Their TVD Seasons?

Think you are a crazy Damon Salvatore fan? Think you remember every detail, every moment of him? Take this quiz and try matching Damon's pictures to the right TVD Season. 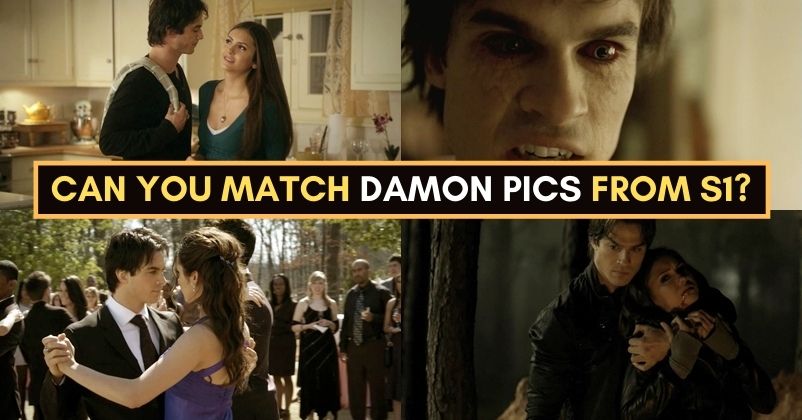