Welcome to Humor Nation. When Silas and Amara became the first immortal beings, the nature had to maintain the balance, therefore it created the doppelgangers who are the mortal selves of the immortal beings. The Petrova doppelgangers carries the bloodline of Amara, it would lead to the birth of Tatia, then Katherine, and finally Elena Gilbert. While we got to see Tatia on the Originals, the love interest of the Mikaelson siblings. Ultimately, she chose Elijah, but tragically died at the hands of newly became vampire Elijah. Katherine was born in the 15th century, due to a wedlock, her family disowned her. When she came across the Mikaelsons, they recognized her for being a Petrova.

Before the pilot episode happened, Elena was involved in a car accident which killed her biological parents Miranda and Grayson, while she almost died due to drowning, but Stefan saved her at the last moment. When Stefan saw her face, he was reminded of Katherine. He decided to stay in Mystic Falls to uncover the mystery and learn more about Elena Gilbert. Then we see Stefan coming across Elena and they both having a spark which quickly translated into a relationship. Soon Damon follows his brother into the Mystic Falls. Elena slowly becomes suspicious of Stefan and senses something fishy. She demands to learn the truth and Stefan reveals about his true identity to her that he is a vampire. This introduces Elena to a whole new supernatural world that will follow her life to the next eight seasons.

The finale episode of Season 1 saw Katherine returning to Mystic Falls. She pretends to be Elena and ends up kissing Damon on the Porch. She tricks John Gilbert after Jenna invited her in the house, first she cuts off the Gilbert ring off John’s finger and then stabs him. Elena who hears the cry of John comes rushing in.

The duo first met each other officially in the episode Memory Lane. They are first Petrova Doppelgangers introduced on the series followed by Amara. An interesting fact about both of them is that Klaus tried killing them both. However, Elena was killed in the sacrificed, but was resurrected when John gave up his life for her. In case of Katherine, Klaus who was enraged at her slaughtered her entire family in order to punish her.

So Take This Quiz And Find Out If You Can Complete The Quotes Of Elena Gilbert!

Only A True Elena Gilbert Fan Can Complete These Quotes!

Think you know every TVD character really well? Take this quiz to test your knowledge of Elena Gilbert's quotes! 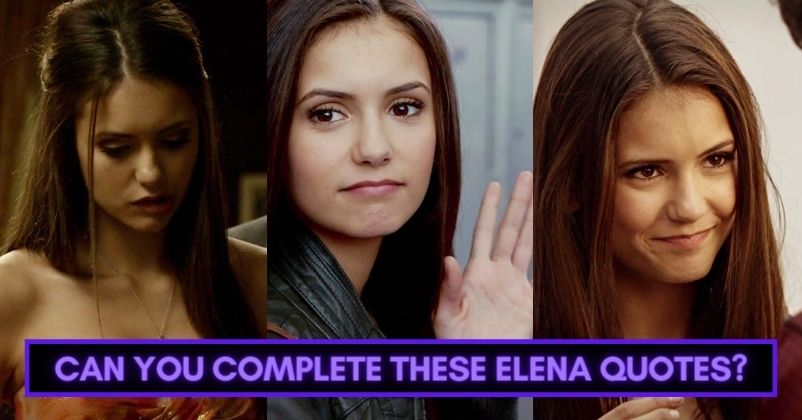