Welcome to Humor Nation.He is sadistic, impulsive, paranoid, and extremely dangerous. Yet, we still love the Original Hybrid. There is something about his darkness that attracts us all, even though he was the bad guy, but we found ourselves rooting for him. But as the show progressed, he became more of an anti-hero. Along with his darkness, we got to see his vulnerability, we experienced his poetic soul and hopelessly romantic nature which could win the heart of any woman.

Perhaps the closest relationship that Klaus shares with anyone is Elijah Mikaelson, his half-brother. They were closer as humans, but their relationship strained for a while when they both fell for Tatia who chose Elijah. After becoming vampires, they vowed to never leave each other’s side and always stay together. Their relationship again took an interesting turn with the arrival of Katherine, Klaus wanted to use her to life his curse whereas Elijah genuinely fell in love with her. After Katherine escaped, Klaus blamed it on Elijah and they didn’t eye to eye for a long time.

However, after Klaus located Katherine who offered him Elena, Elijah decided to help the Salvatores and Elena against Klaus. Elijah would have killed Klaus, but his revelation that their family is still alive forced him to spare the life of his brother. Their relationship improved throughout the TVD Seasons. When Klaus left for New Orleans to uncover a conspiracy, Elijah followed him there and discovered the truth about the child of Klaus. Elijah would request Klaus to protect Hayley and child, it is their chance at redemption.

Kai shares numerous similarities with other TVD characters. For example, both and him were raised by an abusive father who always looked down upon them. Both of them are loose canons and always try to hide their true feelings. They both also have kiled numerous while being on a guilt trip. Similarly, Kai and Klaus also were the outcast among their siblings as Kai was Siphoner whereas Klaus was born as a Hybrid. They both have harmed their siblings too. While Kai killed his siblings, but Klaus only daggered them and took care of them. Also, let us know what’s your favorite Klaus moment!

So Take This Quiz And Find Out If You Can Complete The Quotes Of Klaus Mikaelson!

When Joseph Morgan morphed into the role of the indestructible Klaus Mikaelson, it changed TVD forever. He was a bad buy, but his charisma made us fall in love with this bad guy. Take this quiz to test your knowledge about Klaus' quotes to test. 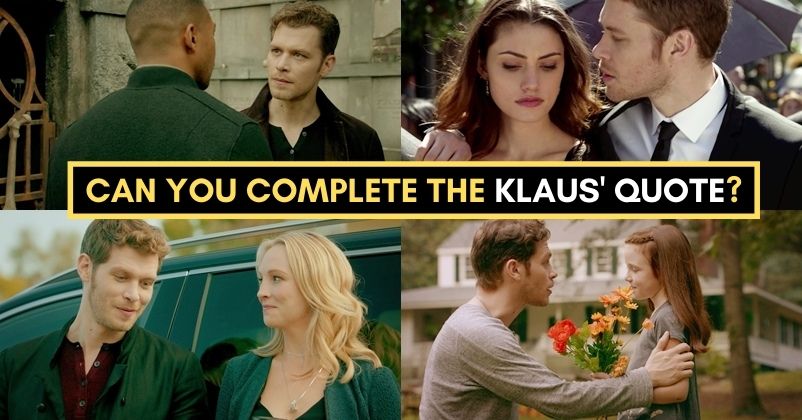