Welcome back to Humor Nation. Archie, Veronica, Jughead, and Betty are the four central and most popular characters of the show. Each of them has a unique personality with surprising traits. Together the gang of these four can take down any enemy, they are inseparable. We already know about the Jughhead-Archie friendship, but the ‘Beronica’, referred to the friendship between Betty Cooper and Veronica is the talk of the town. The two bonded instantly when Betty provided Veronica a tour of their school. It looked like they will be the perfect BFFS, but their friendship had a falling when Veronica kissed Archie which affected Betty. What’s worse is that Veronica knew about Betty’s feelings for Archie and still decided to share a cozy moment with Archie. However, Veronica made amends and they repaired their relationship, turning it into better than before.

RIVERDALE QUIZ: Who Was It, Jughead Jones Or Archie Andrews?

Even though they both claim that they will do anything in the name of their friendship, but there are several instances where they ended up hurting each other. Season 2 saw the arrival of the Black Hood who punished the sinners and was obsessed with Betty to the extent that he instructed her to break off her relationship with Jughead. He then told her to end her friendship with Veronica or he’d kill Veronica, Betty being a caring and concerned friend did what she had to, to save Ronnie’s life. But she could have taken a better approach instead of just hurling all kinds of insults which emotionally hurt Veronica. A lot of things she said seemed personal which is surprising as why Betty had such emotions stored deep inside for Ronnie.

When Veronica decided that she would run for the council, she asked Betty to be her running mate, but when Betty found out about that SoutSide High is being closed as Hiram plans to turn it into a prison facility. She left Veronica and joined Jughead to runf or the student council.

So Take This Quiz And Find Out Who Was It, Betty Cooper Or Veronica Lodge?

Riverdale Quiz: Who Was It, Betty Cooper Or Veronica Lodge?

The two bonded instantly when Betty provided Veronica a tour of their school. It looked like they will be the perfect BFFS, but numerous events have happened that questioned their friendship. Take this quiz to test your knowledge of Betty and Veronica. 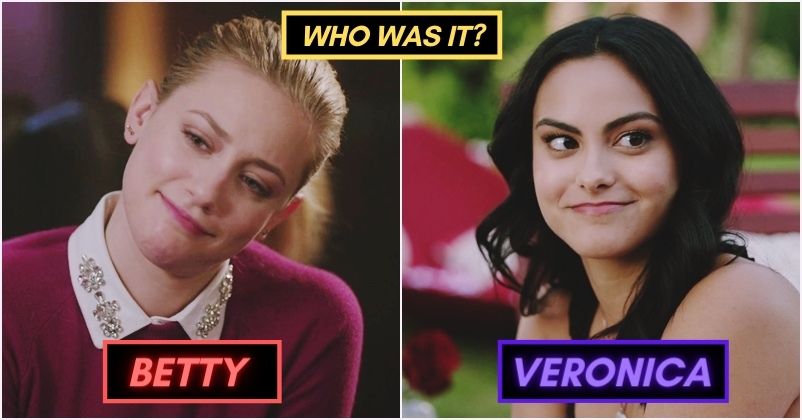