Welcome back to Humor Nation. Riverdale is full of interesting and captivating characters. One of the most popular characters is Jughead Jones. He’s the leader of the Southside Serpents, also a talented writer who serves as the omniscient narrator of the Riverdale. He is extremely intelligent and is well known for his sardonic humor. Despite displaying an apathetic attitude on the outside, he has an impatient temper such as when he snapped at Betty for throwing a surprising birthday party. But despite his flaws, he is genuine and caring person, especially very loyal to his friends.

Jughead has been friends with Archie Andrews ever since they were kids. The two would hangout at the Jughead’s treehouse. They had a falling out during the 2017 summer, they planned a road trip on the eve of 4th of Juley, but Archie canceled it last minute to hook up with his music teacher. This led to them losing touch with each other and growing distant until the time when Archie apologized for his actions. They two reconciled and became close friends again. Jughead even stayed with Archie after the drive-in was demolished. It was Jughead who asked Fred to give his dad FP Jones one more opportunity to work for him.

At the beginning of the Riverdale, Jughead shared a complicated relationship with FP Jones after his dad got fired from the job due to stealing, and he became a drunk stay-at-home. When FP got arrested for being the culprit in the Jason’s murder, Jughead was given the membership in the Serpents due to FP’s loyalty. There are many differences between Riverdale’s Jughead and his comic counterpart. While the comic version was a fan of the hamburgers, Riverdale’s version prefers novels more. The comic version was depicted as asexual whereas Riverdale’s version developed a sudden attraction to the beautiful Betty Cooper, she isn’t the only girl he hooked up with.

RIVERDALE QUIZ: Who Was It, Jughead Jones Or Archie Andrews?

Describes himself as a cynical 'Conscientious Objector', he is the voice of the Riverdale, he is Jughead Jones. And Archie Andrews is the central character around whom every storyline mostly revolves. Take this quiz to test your knowledge of these two characters. 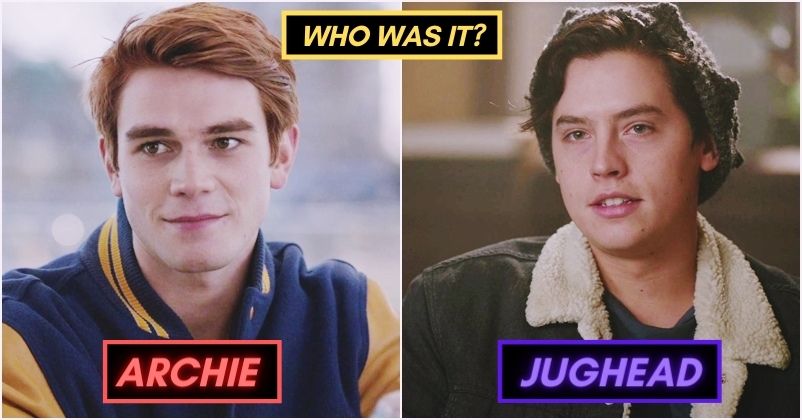