Humor Nation Make The World Smile
Home TV Riverdale Quiz: Who Was It, Varchie Or Bughead? 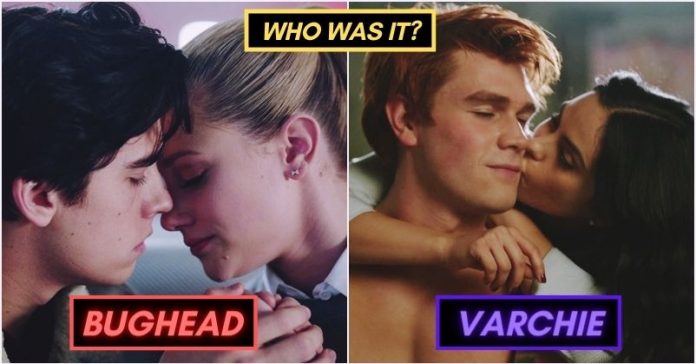 Welcome back to Humor Nation. Riverdale is a town where two things never fail to happen, mystery and romance. No matter what trouble they are in, whether it’s a serial killer on the loose, or an outdated roleplaying game poisoning the minds, the citizens of Riverdale manage to find romance somehow. We have seen plenty of relationships and romances take place over the course of five seasons. But perhaps two of the most important and significant ones are Varchie and Bughead.

Riverdale Quiz: Can You Identity The Character Using A Single Clue

Varchie is the name given to Archie-Veronica relationship. They were attracted to each other right from the moment they laid eyes on each other. They had numerous flirtatious exchanges and kisses before they formally got into a relationship. Veronica was hesistant to get into a relationship with Archie at first because she knew that Betty has feelings for Archie. Even though Archie stated clearly that he has no romantic feelings for Betty. But Archie ended up kissing Betty and when he revealed that to Veronica, it led to their breakup. While the comic book fans believe that Archie-Betty should always have been the endgame and Veronica was nothing, but the third wheel. Ultimately, Veronica decided to go to Barnard and focus on her career. She ended up Chad Gekko and even though their relationship is believed to be toxic by many.

Nobody thought that Betty and Jughead could have such great chemistry despite having totally different personalities. Betty’s mom Alice clearly showed disapproval of their relationship because she has already sailed in that boat, knows how difficult it is to manage a relationship with a Southside Serpent. But their love for mystery adventures and passion to uncover the truth through their journalism binds them together. Betty has always supported Jughead unconditionally, when he was crowned the Serpent King, in order to be with her, Betty went through the initiating ceremony to become a Serpent.

So Take This Quiz And Find Out Who Was It, Varchie Or Bughead?

Riverdale is full of exciting couples, but the two couples that stand out are Varchie and Bughead. Take this quiz to test your knowledge of these couples.