Welcome back to Humor Nation. There are so many reasons why Vampire Diaries became an enormous success. The arcs of the main characters kept us on the edge, whether it’s Stefan going on a rampage as a ripper or Damon trapped in the year 1994 in the Prison World, or Elena who newly transformed into a vampire and couldn’t control her impulses. There have so many dramatic and captivating storylines over the course of eight seasons that just made us fell in love with TVD.

Perhaps the best storyline was the love triangle between Elena Gilbert and the Salvatore brothers. It might have been complicated, but it is what made Vampire Diaries exciting for us. Not just Elena, the Salvatores were involved in a complex love triangle with Katherine Pierce too. Katherine Pierce made her debut in the season one finale. A cunning, manipulative, and fearless character who wouldn’t mind crossing any limit to survive. Her storyline has been really interesting and she provided a much needed depth and a great villain to the show.

Now speaking of the worst storylines, the transformation of Alaric into an Enhanced Original Vampire by the witch Esther wasn’t really amusing. Esther gave him all the powers of an Original Vampire along with many enhanced abilities. She linked Alaric’s life with Elena. While it was interesting to see a good character turn to evil, but this evil Alaric felt like a completely different character. Tyler Lockwood’s character had so much potential and the possibilities were endless once he discovered his werewolf side and later became a hybrid of Klaus Mikaelson. Sadly, the creators didn’t think much of the character and he was killed quickly in a poor fashion by Damon Salvatore.

So Take The Most Challenging TVD Quiz For The Crazy Fans

The Most Challenging TVD Quiz For The Crazy Fans (Part 1)

We have brought to you an amazing TVD quiz. The questions are compiled from all the seasons of TVD. If you could beat this quiz then you will earn the title of 'TRUE FAN". 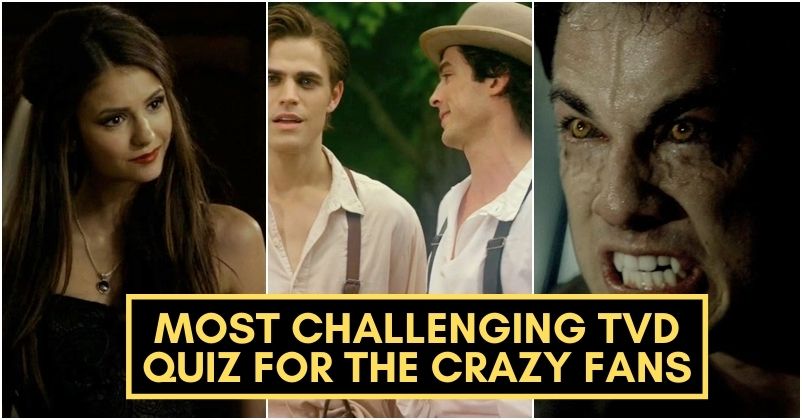