Welcome back to Humor Nation. The Vampire Diaries has given birth to some of the most amazing characters. One such character is Caroline Forbes who started off as self-centered girl who virtually had no life outside boys and being the center of attention at School. But over the course of eight seasons, she grew into a wise, kind, and talented woman. Many characters on the show felt like being turned into a vampire is a curse, it robbed them of plenty of normal things, but Caroline accepted her transition into a vampire. She realized the advantages and powers that vampirism brings and appreciated it. She also realized the downfalls of being a vampire and was intelligent enough to adapt to this new life, like surviving without killing any innocents, keeping her sanity in check.

Her mother Elizabeth Forbes has always been supportive of her and the two shared a close bond. Caroline also developed a healthy relationship with Damon in the later seasons and moved past everything that happened between them. In the first season, Damon manipulated Caroline and exploited her. Caroline is also the first person in Mystic Falls to truly see Klaus for who he is, he saw the goodness in him and made him realize that he’s capable of loving.

Even though Elena Gilbert is the main character of the show, it’s her story, a story of love, friendship, and adventures. She might not stand out as a main character, but her presence in the situations made the show more interesting. She gets a lot of hate for her wrong decisions, but that’s the beauty of it, she is a flawed human. Her character underwent an amazing transformation when she became a vampire. Elena’s shortcomings were necessary to build the storylines of TVD. What made Damon and Stefan more amazing is their epic love story with Elena Gilber.

So Take This Quiz And Answer Whether It Was Elena Gilbert or Caroline Forbes?

The Vampire Diaries has given birth to some of the most amazing characters. Take this quiz to test your knowledge of Elena Gilbert and Caroline Forbes. 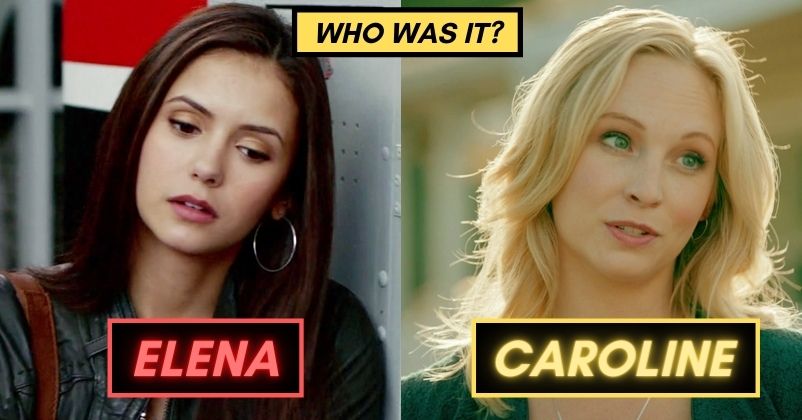