Humor Nation Make The World Smile
Home TV Was It Damon Or Stefan? Only A True TVD Fan Can Answer

Welcome back to Humor Nation. The main protagonists of the Vampire Diaries are Damon and Stefan Salvatore. They are the brothers who were best friends at one time and then became sworn enemies, but their relationship improved again. These brothers despite having hatred for each other always had each others’ back and when the time came they were even willing to sacrifice themselves for the other. The Salvatores went to extreme measures to protect each other.

Was It Elena Or Katherine? Only A True TVD Fan Can Answer

The brothers were good friends at one point of time. The animosity and rift created between them was because of Katherine Pierce. Damon fell for Katherine and displayed unconditional love to the vampire. Stefan was well aware of how much Damon’s love for Katherine, but he still pursued her. Later the brothers found out that Katherine is a vampire. Katherine turned Stefan into a vampire and Stefan turned Damon. But Damon only wanted to become a vampire so that he could spend his immortal life with Katherine. Damon was reluctant to complete his transition to vampirism, he was willing to die rather than feeding on a human. But it was Stefan who convinced him in completing his transition.

Even though they loved each other deep down, but they did commit some awful acts against each other at various occasions. They fought over women, morality, pushed each other to the limits. Stefan Salvatore was living peacefully in Mystic Falls and trying to get closer to Elena Gilbert, but Damon’s arrival changes everything. Damon even pursues a romantic relationship with Elena, knowing that his brother loves her.

So Take This Quiz And Find Out If It Was Damon Or Stefan? Only A True TVD Fan Can Answer

Was It Damon Or Stefan? Only A True TVD Fan Can Answer

Even though the Salvatores loved each other deep down, but they did commit some awful acts against each other at various occasions. Take this quiz to test your knowledge of Damon and Stefan. 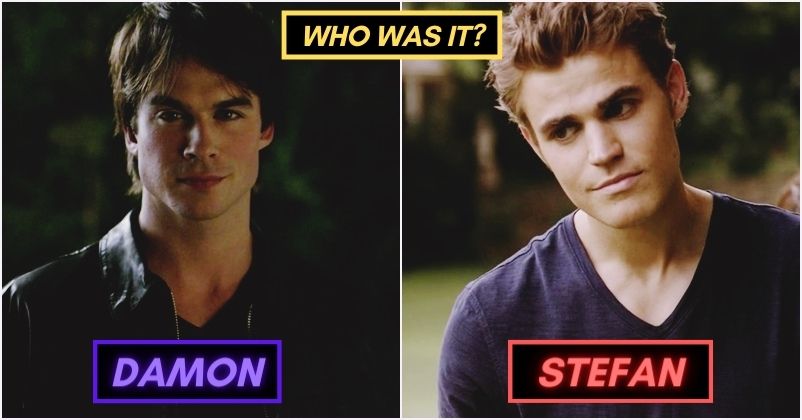