Humor Nation Make The World Smile
Home TV Was It Klamille Or Klaroline? Only True Fans Can Answer

Welcome back to Humor Nation. Undoubtedly two of the most popular ships involving Klaus Mikaelson are Klaroline and Klamille. Every fan has their reasons as to why either ship is the OTP and the debate never ends. There is a big contrast between the personalities of the two women who loved Klaus. Both of them had a major impact on the personality of Klaus and are credited with bringing him back into the light. Klaus is somewhat responsible for being the reason as to why Caroline and Cami ended up as a vampires. In case of Caroline, Katherine turned her with the intention of handing her over to Klaus who could use in the Hybrid Ritual whereas Aurora turned Cami because of the jealously born out of her love for Klaus.

When Cami became a vampire, there was a major shift in her personality. As vampirism heightens one’s emotions and it affects the kind souls more which sometimes forces them to either turn off their humanity or behave in the ways that is opposite to their personalities. Klaus tried controlling Cami which backfired and she grew more distant to us, she was obsessed with the idea of harming Aurora who killed her. Cami would engage in a power struggle with Klaus, dictating that she knows what is best for her. She would even go the extent of stealing the White Oak House, the only thing that could kill the Mikaelsons with the intention of exchanging it with Klaus in return for her dark objects.

This paranoia ultimately would result in Aurora gaining the possession of the White Oak which Cami didn’t intend. Aurora would use the White Oak to create a bullet and shot Elijah. Klaus was disappointed with Cami’s actions, however he also forgave her. He would take revenge from Aurora for harming his family by cementing her alive inside a wall, but Cami’s paranoia would take a sharp turn realizing Aurora is alive and she could return anytime.

She would push Klaus away from her saying she doesn’t love him anymore, the Cami that loved him is gone. However, this would only be a lie to keep Klaus away from her. Cami would then rescue Klaus with the help of Hayley from the clutches of Aurora.

So Take This Quiz And Answer It It Was Klamille Or Klaroline? Only True Fans Can Answer

This quiz is for all the Klaroline and Klamille shippers. So come one, jog up your memories and let's get started. 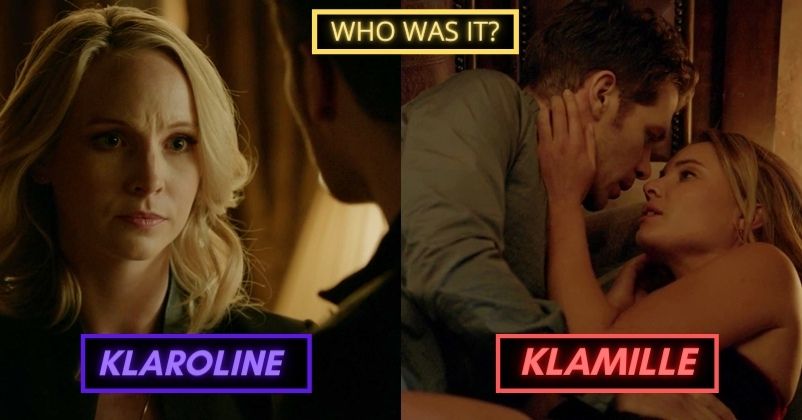