Home TV What Were The Last Words Of These Originals Characters?

Welcome back to Humor Nation. Season 5 of the Originals begin with Hope Mikaelson becoming desperate to see her father Klaus. She takes some drastic measures in order to bring her dad back to New Orleans. Hayley tries to minimize the ill effects of Hope’s actions, but soon the news of her actions is spreads throughout the city. Freya experiences a guilty of not being able to reunite her family and this affects her happiness while being with Keelin. Rebekah is also unable to commit fully to Marcel. Klaus who has absorbed Hollow goes on a rampage and he comes across Caroline Forbes in the episode ‘Where You Left Your Heart’.

How Well Do You Remember The TVD Love Stories?

Soon Klaus returns to New Orleans. Hope looks forward to meeting her father again. But soon the dark magic which had separated them starts acting out in dangerous ways. Marcel also returns to New Orleans and sees a tension between the different factions in the world. Freya also makes a decision about her future with Keelin. Elijah Mikaelson gets his memory erased by Marcel and finds himself awaken in the middle of nowhere. He forgets his identity and is unable to control his vampiric instincts. He comes across Antionette who helps in his new life. But then he comes across Klaus which destroys his new found peace. Also, we would like to know which TVD Universe character’s death was the most heartbreaking for you?

So Take This Quiz And Answer What Were The Last Words Of These Originals Characters?

What Were The Last Words Of These Originals Characters?

So you think you are a big fan of The Vampire Diaries and The Originals? Do you remember every tiny detail about all the seasons of the shows? Take this quiz and see if you can answer the last words of the TVD Universe characters! 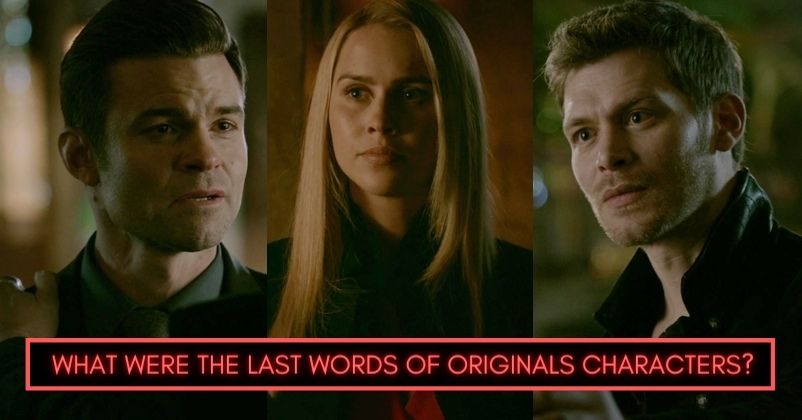 10 Unknown And Interesting Facts About The Vampires From TVD

How Well Do You Know The Crescent Wolf Pack From The...