Humor Nation Make The World Smile
Home TV How Well Do You Know Steroline From TVD?

Hello Readers! Welcome back to Humor Nation. Steroline is a relationship that no one saw coming, nobody though that it would ever happen. Reason is because in Season 1 when Caroline who was attracted towards Stefan was turned down immediately by the younger Salvatore who chose Elena over her. Caroline shifted her attention to Damon who used her and almost tried killing her, but Stefan rescued her. Caroline transformed into a vampire in Season 2. Damon was about to kill her because he believed that she wouldn’t survive as a vampire, but Stefan stopped his brother.

5 Interesting Stats About The Characters On Originals!

Stefan made a promise to Caroline that he would always protect her. He helped Caroline in controlling her vampiric urges and taught her how to master her newly acquired vampire abilities. Stefan was reminded of Lexi as both Lexi and Caroline are blonde, similar in appearances to an extent, and both of them have a compassionate personality. Lexi was the one who helped Stefan is becoming a responsible vampire and he did the same for Caroline.

Their friendship grew more in Season 3 and by Season 4, they became really close friends. Caroline stood by Stefan and offered to help when he was struggling with the Ripper tendencies. They both supported each other emotionally. Caroline shipped Elena and was dimissive of Delena, she supported Stefan to the extent that she herself started developing love for Stefan. When Caroline had a breakup with Tyler after she ended up sleeping with Klaus, Stefan comforted her. Both of them confided in each other, gave relationship advices to each other.

Their relationship suffered a break when they were separated from each other in Season 7, but would reconnect in Season 8. The couple would eventually get married, but their happiness was cut short as Katherine Pierce would re-enter their lives with a diabolical plan that would destroy Mystic Falls. The Salvatores would run to save everyone and take down Katherine once and for all. Stefan would make the ultimate sacrifice of his life and would save everyone, but in doing so, he made Caroline a widow. She struggled with the loss, but focused her energy in building a shelter for the gifted Supernatural children by turning the Salvatore mansion into a School. Let us know what’s your favorite Steroline moment?

So Take This Quiz And Find Out How Well Do You Know Steroline From TVD?

How Well Do You Know Steroline From TVD?

Are you team Steroline? We hope you're team Steroline because this quiz is made for the fans of Stefan and Caroline. If you think you're a hardcore fan then go ahead and prove it by taking the quiz. 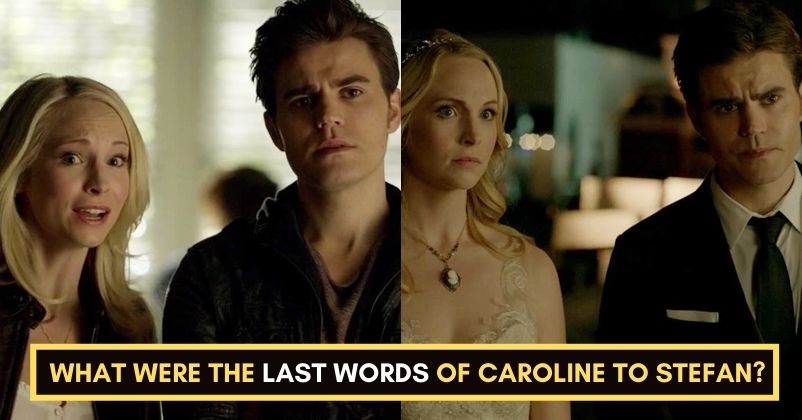