Humor Nation Make The World Smile
Home TV How Well Do You Know The Salvatore Family From TVD?

Welcome back to Humor Nation. The Salvatore Families is one of the most crucial and significant families in the TVD. The first known ancestor of the Salvatore bloodline is Silas, the first immortal being who was also a powerful witch. As Silas couldn’t die due to his immorality, Nature created his doppelgangers to take his place, Stefan was one of them. The Salvatore Family is also one of the founding families, meaning they helped in establishing the Mystic Falls.

Giuseppe Salvatore, husband of Lily, and the father of Stefan & Damon. After the ‘death’ of Lily, he took care of the boys and tried raising him in his own image. While he might seem to be a perfect father on the outside, but he struggled with alcoholism due to dealing with the loss of his wife. Through the flashbacks, we discovered that he was pretty abusive towards Damon, he displayed a great deal of authoritative and controlling nature. Similar to Klaus & Mikael, Damon and Giuseppe also shared a strained relationship. At first, Damon was terrified of his father, but he slowly grew rebellious of him.

Giuseppe openly admitted his favoritism towards Stefan Salvatore and never missed any chance to make it known in front of Damon. In Stefan, he saw himself, and shared a close, loving relationship with him. He believed Stefan was responsible, noble, ambitious, morally right, and was filled with all the qualities that could earn him great success. Whereas when it came to Damon, he looked at him as a disappointment, he believed Damon to be nothing more than a failure. He wanted to keep Damon as far as possible away from Stefan. Giuseppe wanted to protect Stefan from the influence of Damon. Like the other founding families in Mystic Falls, he also became aware about the existence of the vampires. Being a member of the Founder’s council, his sole purpose was to eliminate the vampires, and he did it with a passion.

The mother of the boys, Lily Salvatore was the infamous Ripper who was presumed to be dead. She was imprisoned in the prison world where she mentored a group of Siphoner witches and turned them into vampires, the group become known as the Heretics. They made their debut in Season 6. The last remaining members of this family now are Elena, Damon, and Caroline (who married Stefan).

So Take This Quiz And Find Out How Well Do You Know The Salvatore Family From TVD?

How Well Do You Know The Salvatore Family From TVD?

The Salvatore family is one of the main families in the TVD Universe, it is also one of the Founding Families. Take this quiz to test how much do you know about the Salvatores! 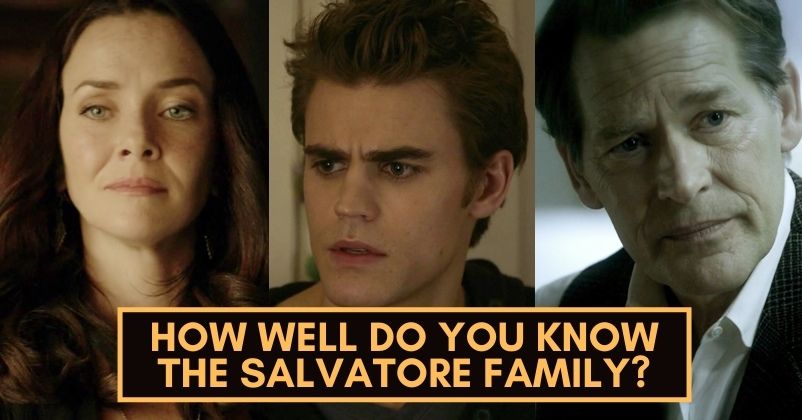