Humor Nation Make The World Smile
Home TV How Well Do You Know Stexi From The Vampire Diaries?

Welcome back to Humor Nation. The Vampire Diaries has featured plenty of amazing relationships and friendships. One such amazing friendships is of Stefan and Lexi. Fans have given the name ‘Stexi’ to their pairing. Stefan considers Lexi to be one of the closest people in her life. Lexi has always been there for Stefan, helping him in overcoming his Ripper tendencies. It was Lexi who taught Stefan how to control over his blood urges and get a grip over his vampiric abilities. Even though Lexi and Stefan didn’t live together, but they would never lose the connection.

5 Interesting Things About The Supporting Characters Of Vampire Diaries

Lexi Branson was also good friends with the Vampire named Rose who abducted Elena in Season 2 in exchange for her freedom from the Original Vampires. Through Lexi, Rose was aware about the Salvatores. Lexi once tried setting up Rose with Stefan, two of her best friends. Unfortunately, both Rose and Lexi met a tragic fate. Lexi arrived in Mystic Falls to celebrate the birthday of Stefan Salvatore, but little did she know that she would fall victim to Damon’s cunning ploy. She was staked mercilessly by Damon who pinned the blame of all his killings on her and Stefan had to watch her BFF getting staked by his elder brother.

Even though it was Lexi Branson’s first and was supposed to be her last appearance, but her death really made the fans feel too much. The response the character received convinced the writers to keep bringing her back in the later seasons. She appeared in the flashbacks and also appeared in the form of a ghost in several episodes. Lexi once had the chance to return back to the living, but she again made a sacrifice to save Damon, the same person who was responsible for her demise. Stefan once promised Lexi that they will find peace together. In the end, Stexi did find the peace together. When Stefan made his sacrifice and walked into the afterlife, he is greeted by Lexi, he responds saying ‘I Was Feeling Epic’, it was the same line which was spoken by Lexi in her first appearance episode.

Where would you rank the Stexi among the TVD friendships? What is your favorite moment involving Stefan and Lexi? Let us know in the comments.

So Take This Quiz And Find Out How Well Do You Know Stexi From The Vampire Diaries?

How Well Do You Know Stexi From The Vampire Diaries?

Stexi refers to the sibling like relationship between the vampire Stefan and the vampire Lexi. They have been extremely close, best friends, and close to siblings. One of the best friendships in TVD history. 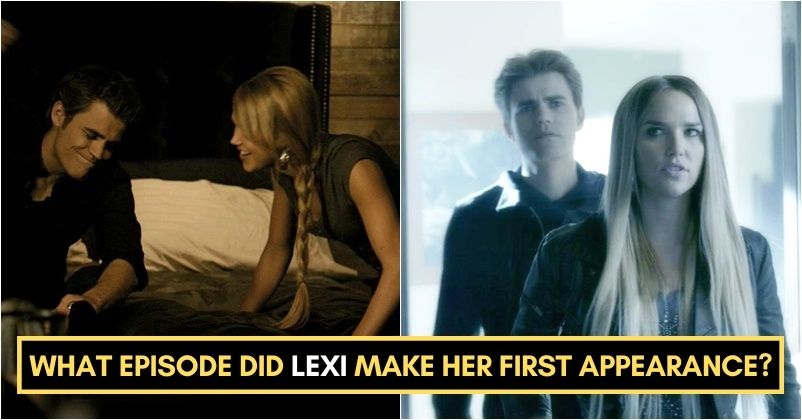