Home TV How Well Do You Remember Season 5 Of Lucifer?

Welcome back to Humor Nation. Season 5 of Lucifer is available on Netflix, it has been split into two batches of 6 episodes. The first batch consisting of 8 episodes was made available on 21 August 2020. Due to the show’s popularity, NETFLIX has renewed the show for a sixth season consisting of ten episodes. Season 6 will be the final season of the show.

Where Do you Belong: New Orleans Or Mystic Falls?

So Take This Quiz And Find Out How Well Do You Remember Season 5 Of Lucifer?

How Well Do You Remember Season 5 Of Lucifer?

So you think you are a big fan of Lucifer and remember every tiny detail about Season 5? Take this quiz and check your knowledge about the Season 5 of Netflix's Lucifer. 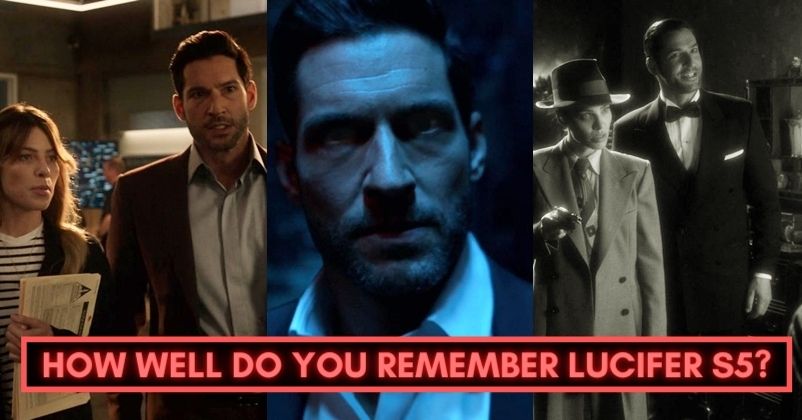 1. Lucifer Season 5 featured a new character named Michael, the arch-angel Michael who is the look-alike brother of Lucifer who has arrived on the Earth to turn Lucifer’s life upside down.

2. Chloe was the first one to realize that the person who is pretending to be Lucifer is an imposter. It was really Michael who was playing the role of Lucifer. To make sure that it is not Lucifer, Chloe shot him. If it had been the real Lucifer then he would get injured because he is vulnerable around Chloe Decker.

3. Thanks to Detective Chloe Decker, the charade of Michael is brought into the light. But the shrewd Michael comes up with a new plan to make things worse. He plants a doubt in the mind of Chloe by revealing to her that she was a creation of the God, she was ‘made’ only for Lucifer.

4. When Amenadiel found out about Michael, he descended into Hell to warn Lucifer of Michael’s actions. But Lucifer convinced him to stay in Hell until he takes care of the matter on the Earth. However, the newly became dad Amenadiel did not stay in Hell for very long, because God told him that the domain of Hell no longer needs a guardian.

5. We learn during the Season 5 that Charlie was not Linda’s first child. When she was a teenager, she got pregnant and wasn’t in a state to raise a child. She, therefore, ran away from responsibility of motherhood and abandoned the child.

6. Maze is a badass character, but she is very scared of abandonment. Being abandoned by her loved ones like Lucifer, Linda, Chloe…Eve. This fear is a result of her abandonment which she suffered at the hands of her mother Lilith.

7.  Season 5 of Lucifer featured an episode titled ‘iDiablo!’ where there’s a series which is based on Lucifer Morningstar. There’s a character named Dancer which is inspired from Chloe Decker.

8. When Lucifer returned to his penthouse, he found Michael was there waiting for him. Michael tried to get into Lucifer’s head by talking about all the wrong decisions he made. Lucifer wasn’t buying any, Michael tried his best to frustrate him more by calling him ‘Samael’, but things got ugly when he called him ‘the unworthy one’.

9. Lucifer tells the story of his ring to Trixie. This story takes place in the year 1946 and it features Maze’s mother Lilith.

How Well Do You Know The Final Season Of Lucifer?

How Well Do You Know Ian Somerhalder?