Humor Nation Make The World Smile
Home TV Riverdale Quiz: How Would You Be Killed By The Black Hood? 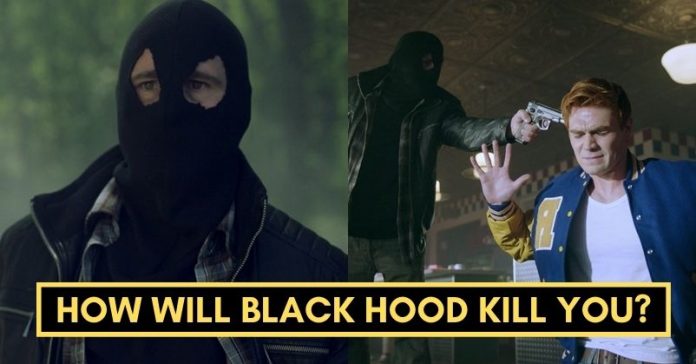 Welcome back to Humor Nation. The Black Hood is the main villain of Season 2. He shot Fred Andrews in Season 1 finale and in second season, he caused terror in the town of Riverdale. He has been responsible for the attack on Moose and Midge, killing Geraldine Grundy who had an affair with Archie. An interesting thing is that all of his victims have been the Riverdale residents at one point, they have committed some sin such as drugs or adultery which resulted in Black Hood punishing them for their actions.

Riverdale Quiz: Which Family Would You Belong?

At first, it was believed that Joseph Svenson, the janitor was the Black Hood. Even after he was shot by Sheriff Killer, the terror of Black Hood wasn’t over. He struck again during the Carrie Musical where he targeted Midge and put her on the display. The original Black Hood turned out to be Hal Cooper who revealed his identity to Betty. While he was doing that, another Black Hood attempted shooting Fred Andrews. It was the Tall Boy who was instructed by Hiram Lodge to carry out the hit.

An interesting fact about Black Hood is that he shares numerous similarities with the notorious Zodiac killer, a real life unidentified killer who operated in the 1960-70s and was never caught. Zodiac targeted the couples, used different kinds of weapons, and sent ciphered letters to the press. The Black Hood also tried killing Midge and Moose, have used different weapons, and have sent letters to Betty. Hal Cooper revealed that his father was the Riverdale Reaper and he took inspiration from him. It was him who blackmailed Joseph Svenson in doing things for him. It was the speech of Betty Cooper that reminded me of the promise he once made to his mom, to clean Riverdale.

So Take This Riverdale Quiz And Find Out How Would You Be Killed By The Black Hood?