Welcome back to Humor Nation. Caroline and Cami played an important role in the TVD Universe. Their relationship with Klaus Mikaelson played a significant role in the storyline. While Klaus Mikaelson might have dated plenty of women in his lifetime, but his relationships with Cami and Caroline helped me made a better person. These two are arguably among the top five ships in the TVD Universe. While both of these characters are unique and special in their own ways. Now it’s a subjective opinion about which character is much superior and which ship is better.

Which Vampire Diaries & Originals Characters Combination Are You?

While both the characters helped him in becoming a better person and helped him in conquering his inner demons. When Klaus was with Cami, he genuinely wanted to be a better person and did things that helped his transformation such as not killing Mikael, sparing Davina. Whereas with Caroline, he did good things only for her happiness such as granting Tyler Lockwood his freedom. The beginning of Klaus and Cami’s relationship was really rocky. Klaus compelled Cami to write down his memoirs and then forget about the interaction that happened. He used Cami to help him with his feelings, but didn’t give her any choice and kept manipulating him.

But this doesn’t mean he didn’t care for Cami, he always came for her rescue. Whether it was saving Father Kieran, or saving her from Aurora, Klaus would drop everything else and came for her. We didn’t see the same urgency with Caroline. Klaus and Cami just connected right from the beginning. Their first interaction was at the street side where Cami described a mural so brilliant that Klaus was mesmerized by her analysis. While Caroline did get to see the softer side of Klaus, but it was Cami who got to see the real self of Klaus, all his demons and unresolved conflicts and issues.

Klaus trusted Cami a lot and this speaks volume about their relationship. When Dahlia arrived to claim Hope, Hayley believed their chance at defeating Dahlia would be with the help of Jackson & werewolves and Hope would be safe at the Bayou. Freya had a plan of her own and Elijah was supportive of her. Whereas Klaus didn’t trust Freya enough to put Hope’s safety in her hands, Klaus became isolated as Elijah daggered him and let Hayley take Hope to the Bayou. The only person who knew the real plan of Klaus of double crossing Dahlia was Cami.

So Take This TVD Quiz And Find Out Whether It Was Cami Or Caroline?

TVD Universe Quiz: Was It Cami Connell Or Caroline Forbes?

The Vampire Diaries Universe has given birth to some of the most brilliant characters. Take this quiz to test your knowledge of Caroline and Cami. 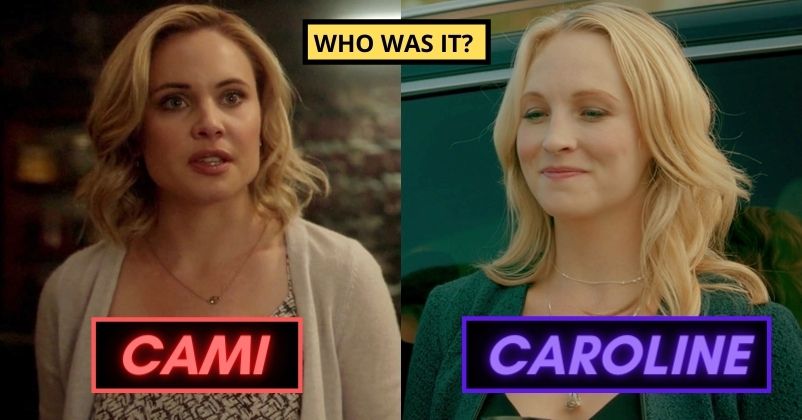 6 Worst Things Done By Salvatores That Prove They Are Not...

Do You Belong On The Southside Or Northside Of Riverdale?