Humor Nation Make The World Smile
Home TV Was It Klaus Or Elijah? Only A True TVD Fan Can Answer

Welcome back to Humor Nation. Similar to the relationship of Stefan and Damon Salvatore, the Mikaelsons also shared a strained and complicated relationship. From being friends who had each other’s back, fighting together to despising each other, and hurting each other deeply. Their relationship fluctuated quite a lot during the course of their lives. In the Vampire Diaries, it was Elijah who we first saw on the screen who explained to Elena and Salvatores what kind of person his half-brother Klaus is. He even assisted Elena and Salvatores against the Klaus. Elijah wanted to kill Klaus because he hold him responsible for the demise of their brother. After Klaus completed the Hybrid ritual, he was in a vulnerable state, Elijah could have finished him, but Klaus revealed to him about the whereabouts of his siblings if he leaves him alive. Of course, Klaus being the trickster and ruthless that he is, he would backstab Elijah and daggered him. Telling him that he fulfilled his promise and now Elijah is reunited with their siblings.

Elijah has been often called as a sentiment fool by Klaus because he trusts people easily, he chooses to see the good in him. After Elijah learned of Hayley and pregnancy, he saw this as a chance to redemption. He tried persuading Klaus to turn to the good side and take up his responsibility as a father to the unborn child. But Klaus saw his relationship and emotions as a weakness, he was hell bent on reclaiming the city of New Orleans. He would backstab Elijah again by daggering him unexpectedly, handing him to Marcel as a token of friendship. It was a part of his strategy to win the trust of Marcel so he could remove him from the throne.

Klaus would later realize his mistake when he confesses to Elijah that had he not played being the king, he could have protected his daughter and Hayley from the harm that came towards their way. He also apologized to Elijah as how because of his mistake the White Oak Stake went missing which could end their existence, but Elijah assured they have survived centuries facing all kinds of threats so they could survive this too together.

So Take This Quiz And Find Out If It Was Klaus Or Elijah? Only A True TVD Fan Can Answer

Was It Klaus Or Elijah? Only A True TVD Fan Can Answer

Just like the Salvatores, Elijah and Klaus Mikaelson also shared a complicated relationship. Their relationship shifted from being partners in crimes to being sworn enemies. Take this quiz to test your knowledge of Klaus and Elijah. 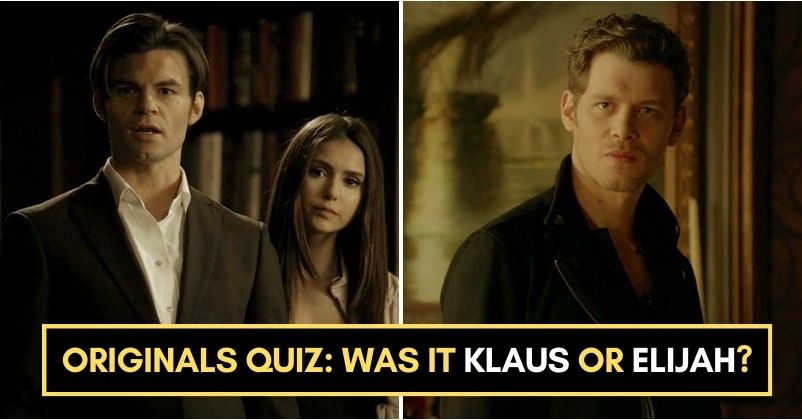