Humor Nation Make The World Smile
Home TV Was It Stelena Or Delena? Only A True TVD Fan Will Remember

Welcome back to Humor Nation. A debate that is still relevant and popular as ever is which ship should be the endgame of the TVD. While Delena became the endgame, but some believe that the creators made the wrong choice, it shouldn’t be Delena, but Stelena that should have been the endgame. A big argument in the support of Stefan Salvatore is that the younger Salvatore has been extremely selfless. He always respected the decisions of Elena, never forced her to commit a choice. In Season 3, when Matt and Elena got into an accident due to Rebekah, Stefan tried saving Elena, but she insisted that he save Matt, and she died in doing so. Stefan being her lover would be naturally inclined to save his love, but he respected Elena and did as she asked him to.

While Stefan helped Elena in dealing and recovering from the loss of her parents, and gave her the love when she needed it the most. In a way Stefan made Elena a better her whereas Elena is the one responsible for bringing a transformation in Damon. Damon is mostly misunderstood, he’s not the bad guy, he is capable of goodness and even his soul carries light, but it took Elena who helped him see the side that he’s repressed. With the love and effort of Elena, he managed to tame down his wild impulses and could become a better man. In the end, Stefan also realized this change in Damon and sacrificed himself so his brother could live the way he was always meant to.

Some people are surprised as how can Elena choose Damon over Stefan. Damon is the same person who snapped the neck of Jeremy which could have killed him if he weren’t wearing the Gilbert ring. He is the same person who killed Lexi, the closest friend of Stefan, and not to forget how he abused Caroline, and endangered the lives of her friends. It was also Damon’s actions that turned Vicki into a vampire and became the cause of her death. Elena cared a lot about Matt so how he could she forgive Damon. Not to forget, him killing the innocent Zach who only wanted to keep Mystic Falls safe.

So Take This Quiz And Answer If It Was Stelena Or Delena? Only A True TVD Fan Will Remember

Was It Stelena Or Delena? Only A True TVD Fan Will Remember

Think you know everything about Stelena and Delena? Take this quiz to put your knowledge to test. 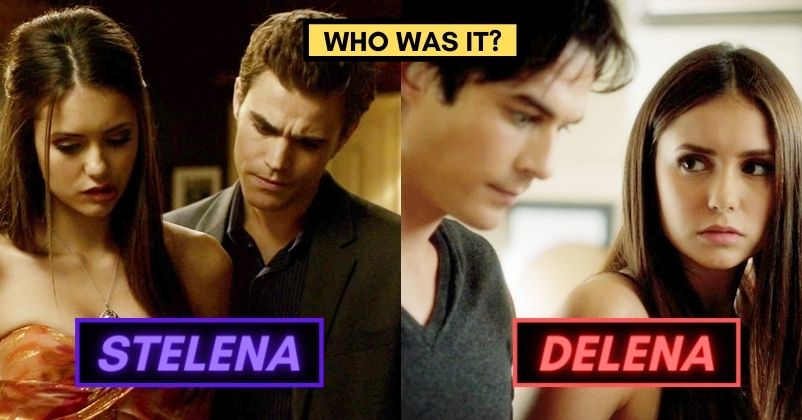